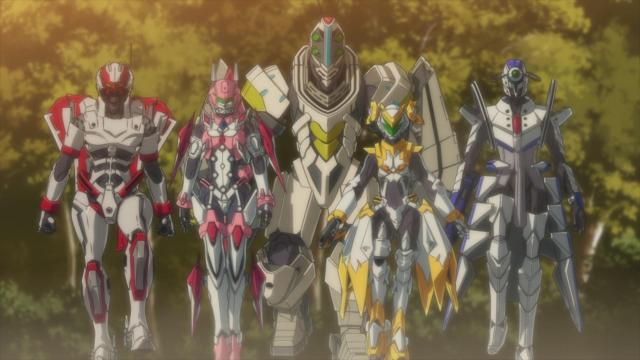 So, apparently Kazari was the only member of Unit 8 who actually got her reassignment processed before close of business on the day the unit was disbanded (assumedly because she was a spy for the brass in the first place), because the rest of the team seems to have nothing better to do than congregate at the office and try to figure out what they can do in the current Summer Wars scenario. They end up discovering clues left by Bird that lead them to the back-up copy of the third government super-database, and engage in a willwear teamfight to prevent Mytho from gaining control of pretty much everything in Japan.

So… the city looks pretty quiet for the third day of a state of emergency. With no cars on the road, and no form of public transportation online, I was expecting the streets (or at least the sidewalks) to be a teeming mass of humanity trying to keep their jobs done and their families fed. The only reference we get to life going on outside of main police headquarters is a random dude who bikes there from his store to relay a message to Kazari after being contacted on his amateur radio by Funasaka (all other communication systems having been shut down).

She ends up meeting them at their destination. Now, on the one hand, the only reason this information is being relayed in this fashion is that the rest of the gang learned it from people who are actively planning to take it over – on the other hand, did we tell this random dude a national security secret? I guess we’re operating on the assumption that he has no idea what “ro” actually is. Hopefully it gets moved after this is over.

It turns out that Bird’s primary motivation is boredom (unlike Dog, whose motivation was boredom and greed). As such, to give the fuzz an even chance of countering Mytho, he allows them to discover the target by setting up a bizarre mystery and engaging in some dubious wordplay. I guess he was pretty confident that the Ministry of Internal Affairs and Communications was going to withhold that location from the cops, because otherwise his toying with Rin’s little sister would have been creepy and pointless.

And so, Unit 8 heads out, after a brief chain-of-command argument between Kazari’s real boss and his boss, who I can’t seem to recall having met prior to this episode. When they arrive, Mytho has hacked the SDF forces to perceive Unit 8 as terrorist willwear, in a callback to the concert episode. Ironically, it’s the resulting firefight between the cops and the military that allows Mytho to jack a couple of drones from an SDF willwear without being noticed. It’s unclear how Unit 8 thinks Mytho is physically unlocking the database, but they assume he’s actively doing so, since Soichiro breaches the sub-basement while the others try to keep the main SDF forces occupied.

At this point he finds his ex, and I thought “Oh – is Soichiro going to fight in such a way that she recognizes his style through the overlay?”, but no, the show is apparently not that clever. Kuroki manages to take out the SDF command vehicle, which is the focal point for the overlay hack… sort of? Soichiro’s ex’s display returns to normal, but another SDF soldier pops up whose display doesn’t, only to be incapacitated by Kazari, who shows up with a version of the sleep-inducing device from the giant mecha episode. I appreciate having back-up plans, but why would trashing the command vehicle only work partially?

Ultimately, it is all for naught, as Mytho manages to fly simple counter-propeller drones sideways to gain access to the final Orochi database. Japan is now his, and Liko is now an apple.

Action scenes are competent at the individual level, but aren’t well put together at the strategic level and have even flimsier justification. I’ll be surprised if the show does much better for the finale.