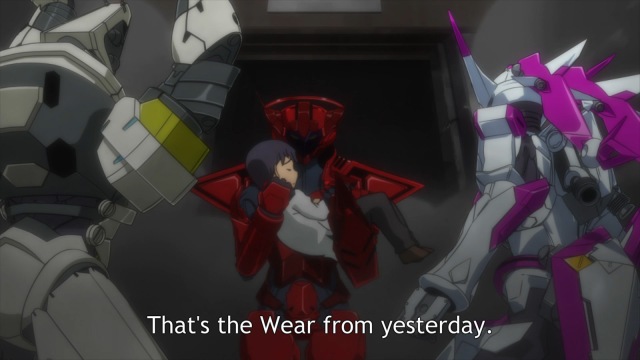 A mysterious and powerful new Willwear appears in the midst of several ACTIVE operations, showing up Unit 8 at its own game. Its wearer is Ooshikouchi Miho, an elite JSDF operative and Sena’s ex-girlfriend. As the two bicker over their shared past, a new bomb threat forces them to work together. Will they overcome their differences or be blown sky-high?

Frankly, there’s not a lot to say about this episode. It was so thoroughly unremarkable that I struggle to remember anything about it despite having watched it barely an hour before this writing. Some of the recent episodes had left me hopeful that the series had started to embrace its more over-the-top elements (it’s hard for me not to enjoy a good giant robot punch-up), but all that potential excitement has evaporated, leaving me with a steaming pile of mediocrity.

After the introduction of the mysterious Willwear, nicknamed (and I can’t roll my eyes any harder without seeing through time) Ulti-maid by the press and general public, we spend some time learning about the relationship between Sena and Miho. We actually met Miho in the last episode I reviewed, when she and the JSDF helped Unit 8 investigate a bomb threat on an airliner. 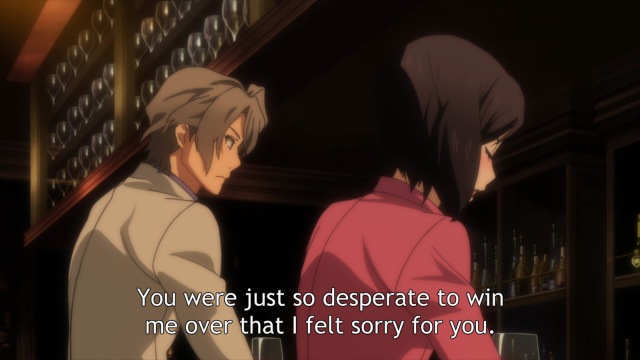 Despite the potential to get deeper into Sena’s head or at least have some amusing hijinx as the two fence over their breakup, nothing of value is gained by watching Miho abuse her ex and Sena apologize to her over and over again. In fact, the only part of the episode that had any impact was finally getting to see Chief Funasaka don his Willwear.

The rest of the episode is comprised of throwaway action scenes, and a running joke regarding a person that Sena is attracted to (?) that never gets a punchline.

There’s also brief aside when it’s mentioned that the JSDF is trying to become the sole government organization allowed to use Willwear, but if this ever actually comes up in any significant way, I’ll be shocked. The episode is focused almost entirely on Sena and Miho, but there’s nothing interesting enough about them to make me give a crap. If there’s one positive thing I can say about them, it’s that I think Miho has one of the stronger character designs in the show, but since I actively dislike most of the others, that’s faint praise. I think it’s something about their gravity-warping hair styles and tiny, pinpoint pupils that creeps me out.

The final sequence of the episode surrounding the bomb threat does bear mention as well, I suppose. We watch Sena and Miho jump through a hallway filled with laser sensors which they can see on their monitors but are invisible to the naked eye. This leaves us watching them backflip and tumble down an apparently empty hallway, which is worth a chuckle at least.

The problem with this sequence is that we clearly see that the bomb is planted in a corner of the building that has open walls, so there’s no reason for the two of them to go dancing through a bunch of traps when they could either fly or grapple their way directly to the bomb.

They try to hand-wave this as the bomber trying to get data on the Willwears’ capabilities, but it seems like the writing staff couldn’t be bothered to apply a moment’s thought to the scenario. Adding a last-minute fight between Sena and Miho doesn’t help cover this up, either. It’s a disappointing end to a disappointing episode, so at least it’s consistent.

Episode 8 offers no substantial character or plot development, and the story isn’t exciting enough to make up for it. We’ve already learned that Sena is a perfectionist with trouble relating to others, and now all we know is that Miho is kind of a jerk with an apology fetish. If episodes 6 and 7 were blips on the heart monitor, episode 8 is the drawn-out beeeeeep of the show flatlining again.

At this point, there’s really nothing I can recommend about Active Raid. It’s not terrible, but in some ways that’s the problem. If it were, I’d be able to have some fun picking it apart. Unless the show seriously manages to turn around soon or decides to take the dive into pure absurdity, I’m afraid I’ll be sleepwalking through the rest of the series.

And yes, what’s-her-face shows up again. 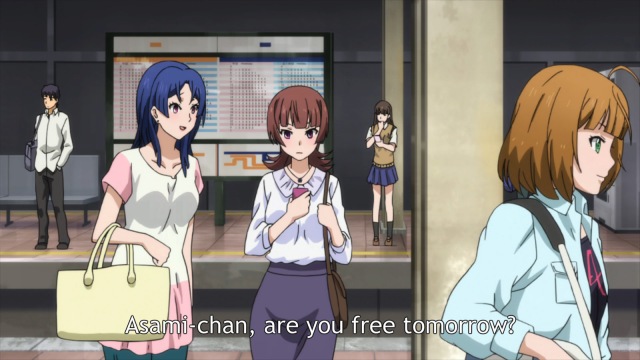 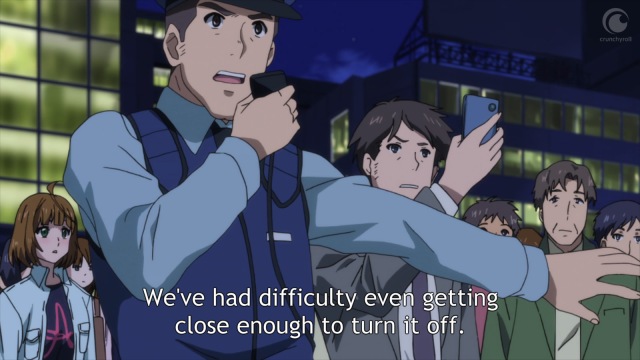