A bomb threat on a civilian airliner pulls Unit 8 into action alongside the JSDF. The team soon realizes that the threat goes beyond simple terrorism, as their opponent plans to use the impending disaster to gain access to a secret government data network. Throughout the incident, Sena’s strictly by-the-book attitude clashes with Kuroki’s more brazen antics, though they do manage to save the day once more.

After the beginning of Active Raid, I tried to remain cautiously optimistic. The mashup of mecha antics and police procedural work seemed like it might make for a fun, lighthearted combo with sentai-style action. I hoped that they might find a nice balance of action and humor, similar to Patlabor (another police procedural with much larger mecha). Clearly, I was asking too much.

The show once again tries to cram a ton of content into its running time, which might have been impressive if I cared about any of it. The regular cutting back to a government official complaining that he will miss his daughter’s wedding because of the bomb threat pads out the rest of the plot, and we’re introduced to an old flame of Sena’s (the blue guy, in case you can’t remember anyone’s name) before she vanishes from the episode with nary a backward glance. The bulk of the run-time is spent driving home the antagonistic relationship between Sena and Kuroki (the red guy), but since neither of them really changes their attitude, they’re just reestablishing stuff we already know.

Beyond shallowly exploring those two butting heads, episode 4 also introduces us to what is likely a longer-running plot. The hacker Logos is looking to access some form of government database for his own nefarious ends, and has set up this whole scenario to help him crack the security. At the same time, he seems dead-set on messing with Unit 8 in increasingly silly ways, most notably by unleashing a horde of inflatable mascots on them while they try to disarm a bomb.

For now, I just can’t take this guy seriously. He looks like he’s trying to act all cool and sinister, monologuing to no one in particular about his schemes, but at the same time he’s sitting there eating popcorn and trolling the cops. For now, he’s neither interesting nor entertaining enough to make a good antagonist, even for a fairly whimsical show like this.

Since the plot of this episode is so straightforward, there’s not a lot to analyze. Unfortunately, this also led me to start paying more attention to the background details. Since the beginning of the show, I’ve had this creeping sense that the writers either don’t know or care about getting the details right, and this episode seems to confirm that. There’s a lot of little inconsistencies that pop up and convince me that no one is double-checking their work to be sure it all makes sense.

For one, Unit 8 sends Sena onto a still-flying plane with no jetpack, despite having that kind of equipment readily available. Instead, he’s supposed to jump from a tanker jet to an airliner with nothing but a grappling hook and a prayer to Zephyrus, god of the winds that he won’t get thrown into the troposphere. It’s all contrived so that he needs to be saved by the flight-capable Kuroki, but it makes no damn sense from the start.

Other seemingly minor issues build up throughout the episode. Suddenly, their command train can operate on pavement. If they can just take to the streets, why bother with all the track-shifting nonsense?

More importantly, when they have been told the exact location of the bomb that is on the plane, why does Sena spend time checking every other part of the aircraft first? Sure, it’s good to be thorough, but wouldn’t you save that for your partner, or worry about it after you had checked the most obvious spot? You’re not Holmes trying to outsmart Moriarty; you’re a bunch of cops trying to do their job quickly so a plane-load of people don’t die.

Other nitpicks: why do the heroes’ Willwear look dumber than some military grunt suit? 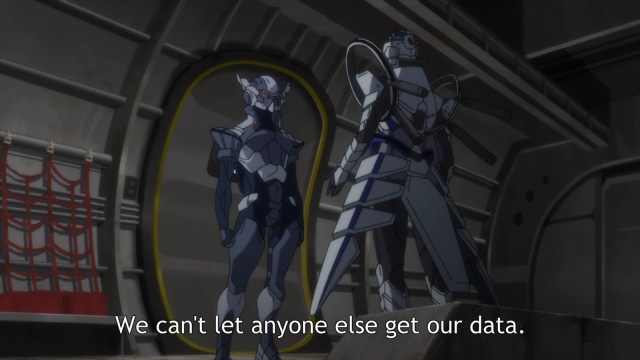 And why does every single woman in this show have the face of a 14-year-old?

Everything in this episode smacks of a show whose staff isn’t fully invested in it. Nothing in the show is all that awful, but nothing is terribly interesting or exciting either. It’s not bonkers enough to enjoy the ride, nor bad enough to make fun of. Episode 4 is so spectacularly mediocre that I spent the entire time picking apart the smallest background details for stuff to talk about. Ah well, at least Background Girl makes her contractual appearance.

Here’s hoping the next few episodes are more interesting. I won’t be holding my breath.