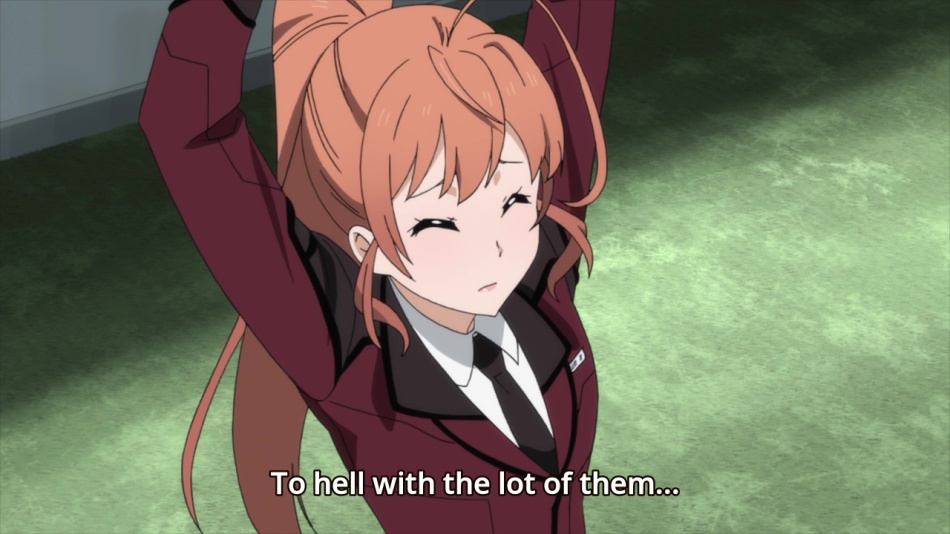 Japan’s ACTIVE unit fights red tape and has its boss spend a good deal of time apologizing to everyone for all the collateral damage. When a new evil(?) appears and causes problems that get personal for one of the Unit 8 members, Asami gets into the Willwear to bring in some justice.

Active Raid needs someone to tell it to stop moving so darn fast. I am not sure if it’s trying to be a blur to add to the overall feel of the show (police work can happen at any time #hangontoyourshortskiddo). If it is it’s okay, but if it’s not and it thinks it’s being clever, well…that could be a problem.

In this episode we discover that Rin Yamabuki (the BOSS!) has a twin(?) of some sort named Hinata, who is younger and better at life than she is. After a hard night of drinking Hinata runs off to school and leaves some french toast for Rin. We then see Rin wandering around apologizing to everyone in the main headquarters about the collateral damage from the first episode. We discover that she does this often (maybe after every mission..) but that she also was chosen for he job based on her calm demeanor and her objective sense of justice. This becomes important later in the episode.

Afterwards Asami rolls in to work on time and tries to snoop around. She gets tricked by creeper face maintenance guy and “fights” him off, but the show gives us suprising…”taste?” in that in doesn’t seem like maintenance guy is a full blown creeper.

We are then introduced to Logos, run by some sort of evil genius man and his creepy infantile minded companion. Evil genius seduces some other guy into grabbing a Willwear and attacking Hinata’s school.

Based on the type of Willwear this guy got ahold of, Asami asses that she is the best choice for taking out the enemy while preventing collateral damage.

What I found to be amazing about Active Raid is that for every bad point I made in my head I was almost always able to counter it with a “yeah…but..” statement. Maintenance guy is weird, but he doesn’t creep on Asami, he is genuinely trying to fix her suit and get it calibrated. A bunch of Willwear terminology and tech specs gets thrown around at a breakneck pace, but maybe the show knows what it’s talking about and I just need more time to adjust. Oh great…Asami is getting into the mech suit…but she is wearing a sports bra and panties so she’s waaaay more modest than I was expecting. The weird little moe girl with the villain(?) is creepy but…no…no…she’s really just horrible. Hey…I did say “almost always able to counter it”, didn’t I?

Asami ends up discovering that avoiding collateral damage and subduing a suspect are very hard to accomplish together and the episode ends with an interesting thought from Rin. Overall, I am newly inspired to give Active Raid a little more credit. It spends a good chunk of its episodes dealing with real world issues if there were robot police. This includes red tape, mechanical calibration (Asami’s Willwear is desperately trying to calibrate when it first turns on. I appreciated this a lot), Government ass-kissing, and safety for civilians and suspects alike. I am hoping the villian has something interesting up his sleeve as well.

Here’s to hoping Active Raid tells us more about Willwear and how civilians use it (the stolen Willwear the suspect uses is a “Firefighter type”), and delves more into the social/political/government issues faced by cops fighting in high powered mech suits. Even if the show stays as it is and just takes time to breathe a little, I may still have a good time. Either way, here’s hoping for Downhill Willwear in the Olympics, sometime in the future. 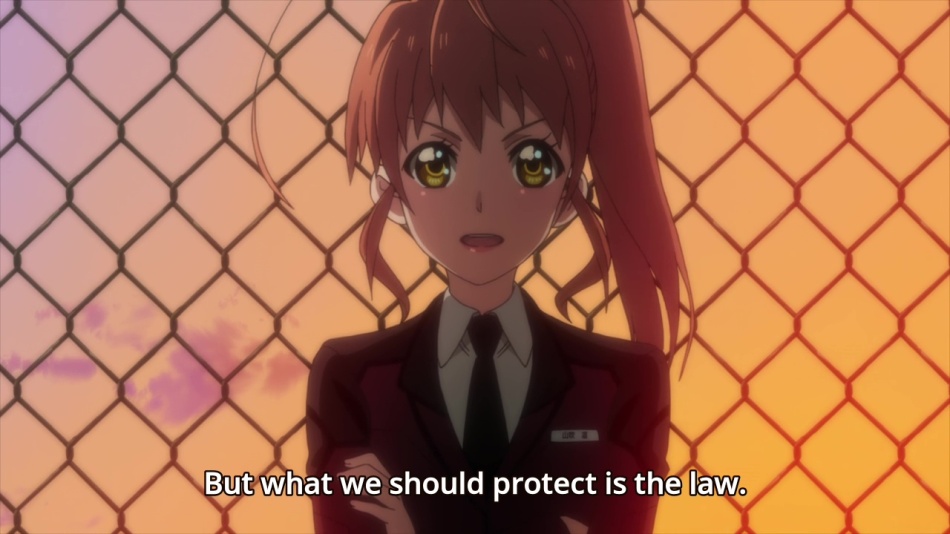