The Superhuman Investigation Bureau looks to aid a young man name Judas in becoming a “registered superhuman”. Elsewhere Earth-chan fights evil using the power of robot-ness. When The Prime Minister seeks to join the Defense Force of Earth and a protest breaks out, and the people’s heart lie with Earth-chan, how will the Bureau handle it?

Here we are at lucky number 7! One of the things I love most about Concrete Revolutio is how much attention to detail you have to pay. The show is always bombarding you with facts and minutia and you have to be keeping track of somehow to get the full story in the end.

This episode is the first time we get more information about Kikko. To be honest I was surprised she even has more layering to her because I assumed she was being used as the “naive girl” who eventually has to grow as a person and realize that the world is complicated. Instead we get a scene where Emi and Uru are discussing Kikko’s true purpose and how to steer her back on track to fulfill her duties. Emi continues to grow more devious as a character and I am interested to see what her REAL motivations are outside of keeping Jirō as a little play thing. Her entire role in the Bureau just seems like a game to her and I’d be shocked if she’s not covering up some secret plan.

This episode is primarily about Earth-chan. The details about Kikko that you hear in the beginning are VERY important as they help other pieces of the episode make more sense. This is one of those episodes you are going to want to watch twice. The story presents itself by introducing us to Judas; a young man who becomes a registered superhuman with the aid of the Bureau. Kikko is sent to retrieve Judas and is confronted by Earth-chan who believes that Judas will return to his evil ways after his stint in prison.

What follows is a look into how Earth-chan operates but more importantly what Earth-chan means to planet Earth. Thus far the series has mostly introduced us to the “human” side of Superhumans. Episode 3 gave us robotic Superhumans but Detective Shiba and the Megasshin duo were all about the idea of “justice”. We got a fight that never concluded and we didn’t really see any impacts on Japan as a whole. The conflict was pretty contained to “robot logic regarding “Justice”” 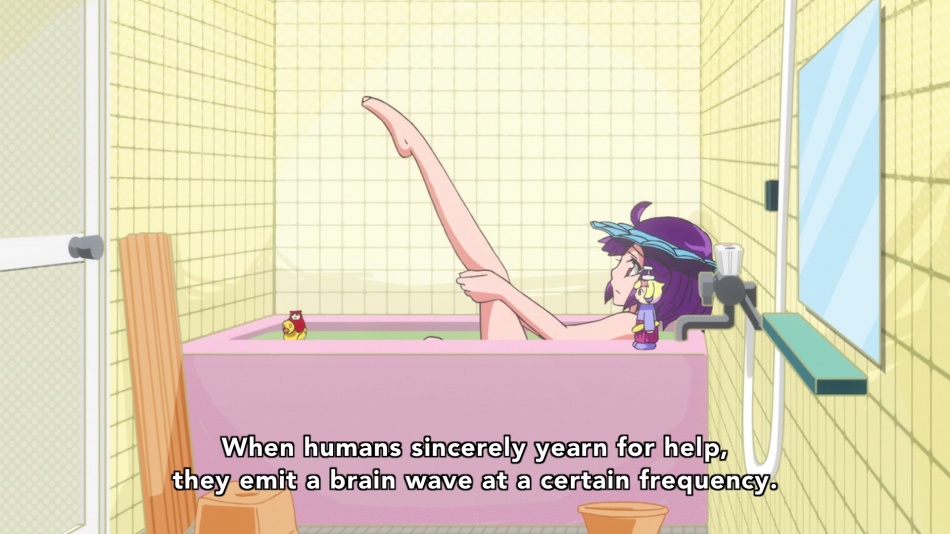 This time around the conflict is more universal. What is “Good” and what is “Bad”? Earth-chan sees something simple like lying as “bad” because she cannot understand how it could ever be used for anything but “bad” purposes. Inevitably a student protest occurs because government is trying to merge Japan with the Defense Force of Earth. The most powerful event in this episode (IMO of course) is where Jiro explains that whatever side Earth-chan takes in the conflict between the govenment and the student protesters will be the side the people believe is “good”. Judas sides with the protesters, which Earth-chan is opposed to. He shakes her foundations of what is good and what is evil. In this episode the Bureau is powerless and we see how a superhuman can influence humanity with such a massive impact. It also gives us more shady dealings with the Bureau and this time Kikko allows us as the viewers to have them acknowledge that they are trying to take advantage of Earth-chan. This episode also brings to the surface some very deep ideas, like how we as humans need a symbol or icon to latch onto. While this may seem ridiculous when looking at something like Earth-chan, one can easily allude her to monarchies, government, or religion. We as people latch onto these things and believe that they define what is “right” and what is “wrong”. Their mandates are what we must follow and if we do not, then we are clearly flawed. 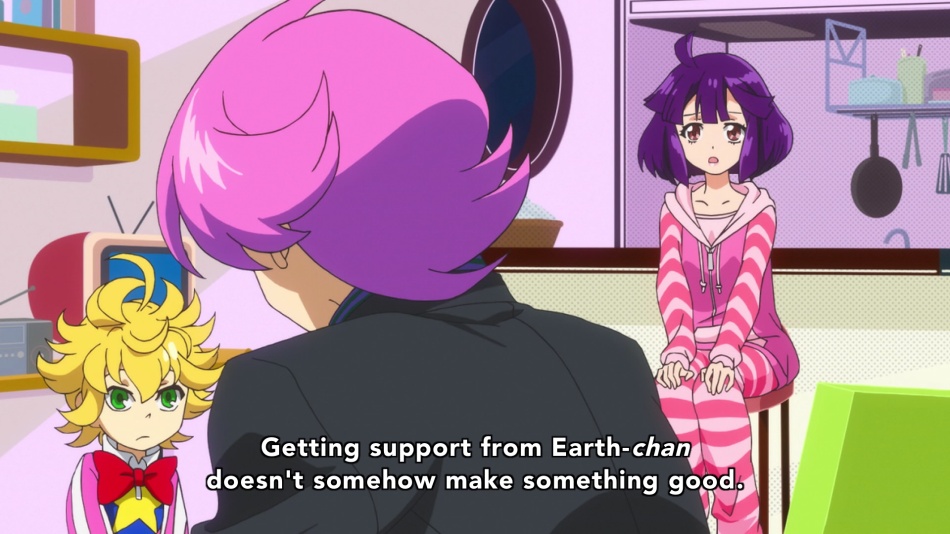 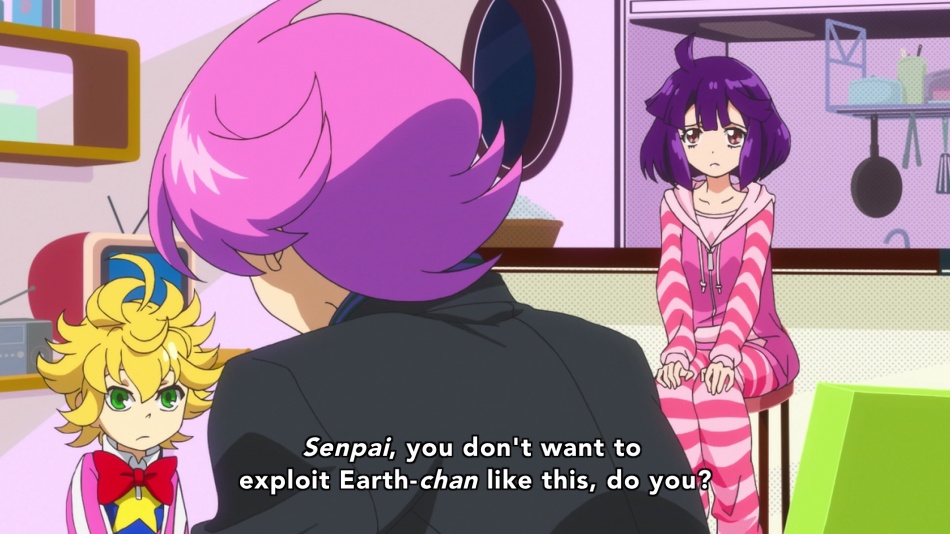 Following the trend of episode 6, we don’t have flashbacking to the future/past interrupting majority of our tale. Judas’s past is shown via flashback but it’s all pretty clear cut and easy to follow, which frankly, I appreciated. I love the “Memento” style that Concrete Revolutio touts but with all this new information about characters and motivations it’s nice to not also have to keep track of what’s happening at what point in time continuously.

Be sure to watch after the credits of this episode as it shows future Jiro and some characters we now know reuniting for a common cause. This cause also hammers home that Earth-chan is a very important part of the lives of the people of Japan (and potentially the world). The mystery as to why Jiro broke away from the Bureau comes closer and closer to the light as we head towards episode 8.

Overall I thought this episode was amazing even if it didn’t make 100% sense. Does Earth-chan go around keeping track of all the people she’s interacted with and put in jail? Her issue with Judas (which stems from him lying) seems a bit silly, and she has such an extreme reaction to seeing him when he gets out of prison. What happens if she has to be in 5 places at once?! That being said, I loved what the episode represented, and holy wow it is choc full of little tidbits that tease you about deeper details. Keep on chuggin’, Concrete Revolutio! Don’t let me down! As a final note…why am I getting all the robot episodes guys?!?!? 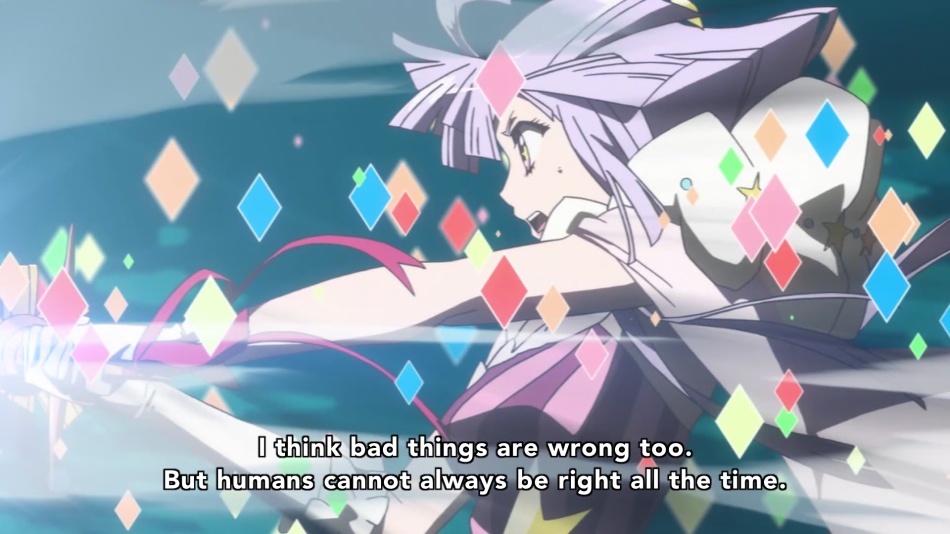