The Heroic Legend of Arslan is a new anime based an ongoing series of fantasy novels by writer Yoshiki Tanaka (most famous for Legend of the Galactic Heroes). The books have been published since 1986, and a 6-episode OVA based on them ran between 1991 and 1995. The story follows Arslan, Prince of the Kingdom of Pars, as he grows and confronts challenges as a young ruler. 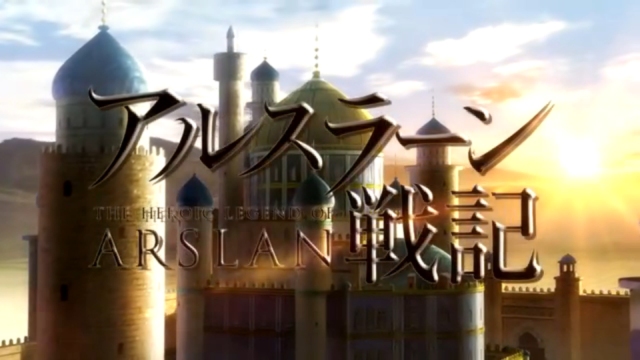 The first episode of Arslan provides a good introduction to the world and characters that we will be following as the show goes on. We meet the eponymous Prince as he is learning swordsmanship, and it quickly becomes clear that he is no warrior. It is also evident that while Arslan seems like a personable, diplomatic boy, his family life is far from easy. His father is an undefeated hero with little time for his son, and his mother is distant at best. With little to keep him in the palace, Arslan heads to the market to look over some of the prisoners taken in his father’s latest victory against the fanatical warriors of Lusitania.

Things quickly go poorly for the Prince, as a young war captive breaks free and drags Arslan along on his escape. A frantic chase ensues, and Arslan is intrigued by the escapee’s zeal and sense of righteousness. At the end, the Prince is forced to consider both the implications of his nation’s culture of slavery and his own eventual ascension to the throne. We are left with the promise of battles to come and the need for Arslan to become a true leader.

So far, Arslan is shaping up to be a fun fantasy adventure. The introduction provides a good sense of place and gives us a nice glimpse of all our key players thus far. Arslan himself seems likable, but his naivete and lack of martial prowess show that he has plenty of room to grow. Based on the intense foreshadowing at the end of the episode, he’ll certainly need to do a lot of that.

I’m particularly impressed with the show’s environments and costumes, which focus mainly on the people and capital of Pars. The city is lively and vibrant, with a clear Arabian theme. Its citizens are happy and prosperous, but that prosperity is built on the backs of slaves. In a surprising turn, Arslan himself has no serious objections with the system, so long as the slaves are treated well (by the standards of slavery, anyway). This is a nice change from the way most fantasy protagonists are depicted as having modern-day sensibilities and morals no matter the time period. I look forward to seeing how his attitudes evolve as he ages and journeys beyond the capital.

It is certainly too early to make broad judgments about the show, but for now, I’m definitely going to give the first episode a recommendation. Its animation and character designs are fine, if a bit unremarkable. I’m not a big fan of the use of CG models for large battle scenes, though I understand the difficulty of animating large numbers of soldiers. Some of its dialogue regarding slavery and religion comes off a bit preachy, but when it’s coming from 11-year-old characters, I can overlook that easily enough. For now, the show has enjoyable action and paces itself well, so give it a watch and see what you think for yourself.

Please stay tuned for more episode reviews of The Heroic Legend of Arslan throughout the coming weeks!

2 comments on “Rolling Review – The Heroic Legend of Arslan (01)”