Akko has finally learned the importance of the seven Words of Arcturus and is determined to unlock them. However, unlocking the next word requires something that she lacks completely. Akko and Sucy join Lotte in Finland to meet her family and try to decipher the next word, but disaster strikes when a magical disease spreads throughout the town. Will Akko find what she lacks in time to save her friends?

With the over-plot of the season kicking into high gear last episode, this one takes things in a much more episodic direction. Even so, with the potential to restore magic to its former glory on the line, Akko is hell-bent on discovering the remaining Words of Arcturus, and nothing is going to stop her.

Not wanting Akko’s normal pique to get out of control, Ursula tells her that the only way for her to master the remaining words is to experience them as she grows and comes to understand their meaning. This echoes what Professor Woodward (the tree-lady from earlier) told her and Croix many years ago. The difference in their reactions says all you need to know about what they thought of that advice. 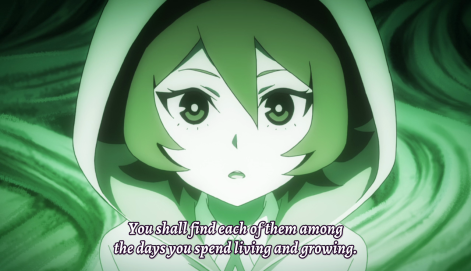 What follows is a quick visit to Lotte’s hometown in Finland to meet her family and see her old stomping grounds. Though they don’t dwell on it, the slow weakening of magic can be seen in how the Jansons’ magic shop has been forced to become more of a general store over time. Just because it’s time for shenanigans doesn’t mean the episode is going to let you forget that there are serious events transpiring, and I appreciate that reinforcement of the show’s core struggle.

We only get a little time with Lotte’s family in this episode before they and the rest of the town are consumed by Greenman disease; a magical affliction that causes moss to cover peoples’ bodies until they wither and die. All of this is brought on by a wide variety of esoteric conditions being met, culminating in the baking of hapansilakka pie, a Scandinavian “delicacy” made with such foul-smelling fish that it’s considered a health hazard elsewhere in Europe. I have a soft spot for ridiculously convoluted magical nonsense, so watching the montage of insanity that contributed to this outbreak was a treat. 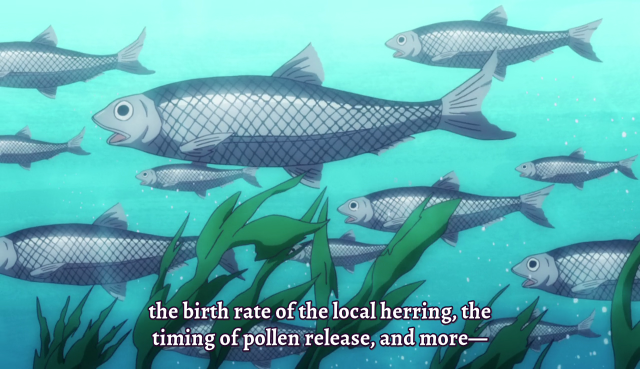 This sends Akko and the gang on a mad quest to secure the ingredients for a cure. As you might imagine, the components are almost as crazy and specific as the cause of the disease. 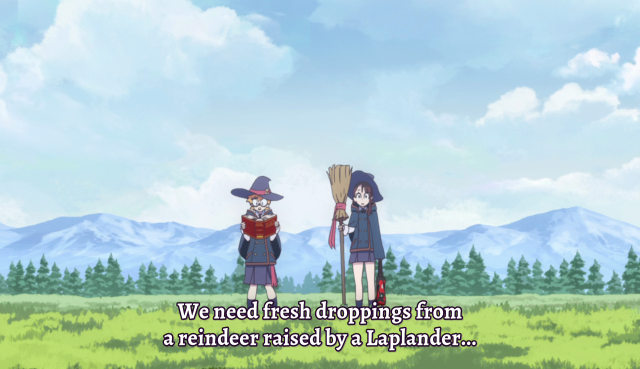 As her friends begin to succumb to the disease as well, Akko has to set out on her own to finish assembling the cure. This finally leads her to a revelation about the importance of the next Word, though how much of the lesson she absorbed is left up for debate.

While the episode does move the plot along, most of it is purely short-term comedy antics. I’m fine with this, though it does feel a little more phoned in at times than some of the earlier episodes, which featured tighter stories and more focused humor. In any case, we do see a brief aside of Croix in her magical laboratory, and learn a little more about how she hopes to achieve her goals.

Episode 16 is decent, has plenty of humor, and hints at more to come. Like some of the filler episodes in the early part of the show, it feels a little insubstantial, but Trigger has proven that even their less engaging episodes are still worth a watch. Progress is made and tidbits of backstory are revealed at a steady enough pace that I doubt we’ll need any great exposition dumps in the later arcs. Even without the more emotionally charged events of the main plot, it’s plenty of fun and a good chance to see Akko, Lotte and Sucy working together to solve a magical disaster that Akko didn’t have a personal hand in, for once.